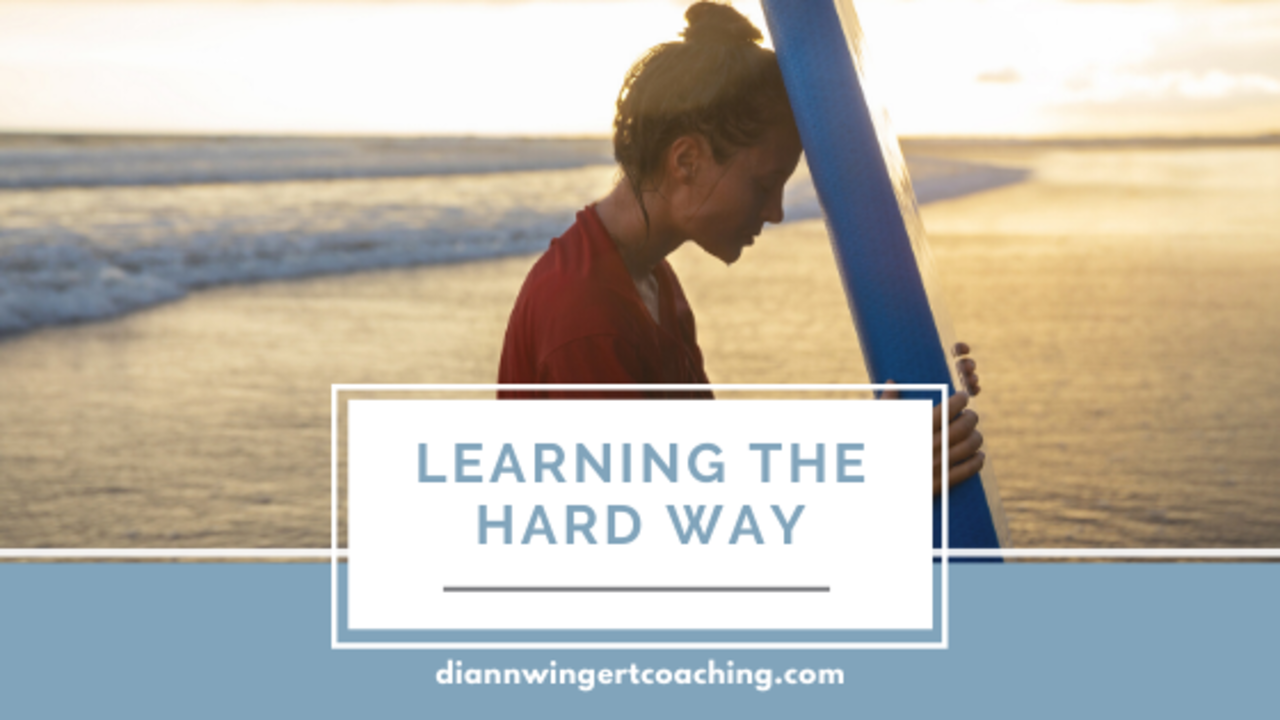 Does everybody need to learn the hard way in order to learn anything, or it is just me? I went through so many situations that, looking back, now seem like unnecessary suffering, but at the time, I truly didn't see that I was making a choice. It wasn't until I had accumulated five root canals until I realized that there might be a pattern. Of course, there was. I was clenching my teeth apparently all night long, every night, and through much of the day as well. It was one of the consequences of suppressing my hyperactivity so that I could be a "good girl" and pass for normal in the classroom and beyond. I never made the connection between root canals and teeth clenching, nor the connection between teeth clenching and ADHD for many years.

Or how about the number of parking tickets I accumulated because I lost track of time, was having too much fun to stop or couldn't remember where I parked my damn car? Eventually, I learned to always park my car in the exact same spot, or as close to it as possible, take a photo of the location and trace my steps very slowly and carefully, so retracing them would be a breeze. Back in the day, I would always arrive at the last possible moment for an appointment, or be late, pull into whatever spot I could find and rush like a madwoman toward my intended destination.

Because I wasn't paying attention to where I was, it was nearly impossible to find my car again, once the appointment was over. I didn't grow up with a smartphone embedded in my palm, complete with locator apps that eliminate the need for memory and mindful awareness. One time, I spent an hour searching for my car and was "this close" to calling the cops to report it stolen, when I suddenly realized I was in the wrong lot at the other end of the shopping mall.

Was I just willful, full of pride or stubbornly committed to doing it My Way, no matter the outcome? Or was I such a perfectionist I couldn't bear to admit, even to myself, that I had absolutely no clue what I was doing? What if there was something about the struggle that I actually liked, enjoyed and preferred to an easier way of life? To be totally honest, I can see a piece of myself in each of these descriptions. Proud, perfectionist and preferred to struggle. It might sound crazy to most, but at least some of you reading this can relate. There is something very stimulating about doing difficult things, and if our lives are not full enough of difficult things, then we might just have to turn ordinarily easy things into difficult ones, just to spice things up.

When I married my first husband, some in our circle could see what I could not, that this relationship was going to be tough and that the odds were stacked against the marriage going the distance. After the divorce, I heard an unconfirmed rumor that people at our wedding were placing informal bets on whether we'd even make it a full year as a married couple. The minister who married us told me after the split that he always knew it would end this way. I felt hurt, angry, and betrayed. Why the hell didn't he saying anything?  Shouldn't he have warned me? Didn't he have a sworn duty to minimize the number of couples who got divorced who were members of the Christian church?

My face was blanched with emotion and I could feel myself gripping the wooden arms on my chair. He looked completely calm and unaffected by what he had just uttered and by my reaction. He didn't appear to have compassion for me. In fact, he seemed almost business-like. I saw myself as a young mother in the midst of a heartbreaking crisis. He evidently saw me as something else. Something that would take me many years to fully recognize for myself.

Revered Taylor calmly replied that while he knew what the outcome of this union would be, he also knew that I would not have listened. He saw me as a headstrong and determined young woman who set her mind to something and went after it. I didn't ask for anyone else's opinion, nor did I contemplate the chances of success or failure. I was focused on my goal and the rest of the world simply didn't exist for me at the time. While I flinched a bit, listening to this description, I had to admit he was right.

He might have admired my spirit in some ways, but as a Christian woman, I was hardly a role model. I was seen as disobedient, willful, prideful, and unsubmissive. Another church I attended years later informed me that my stubbornness and independence were the reason my second husband was not a more godly man.

I am no longer a church-going woman and have since come to admire myself for how I
used these traits to propel me forward in life, developing resiliency and resourcefulness along the way. I now know that I am not a victim of my circumstances but instead the master of my fate. I have no one to blame and no need to blame anyone. My philosophy of life rests on the concept of karma.

Karma is not about reward and punishment, as so many think. It's about cause and effect, causes and conditions. No one is teaching us a lesson, life is the lesson. And some of us need hard lessons in order to learn what we most need to know. If learning things the hard way is my path and becoming brave, strong, and compassionate is the outcome,

I can definitely live with that.