It's OK to be Extra 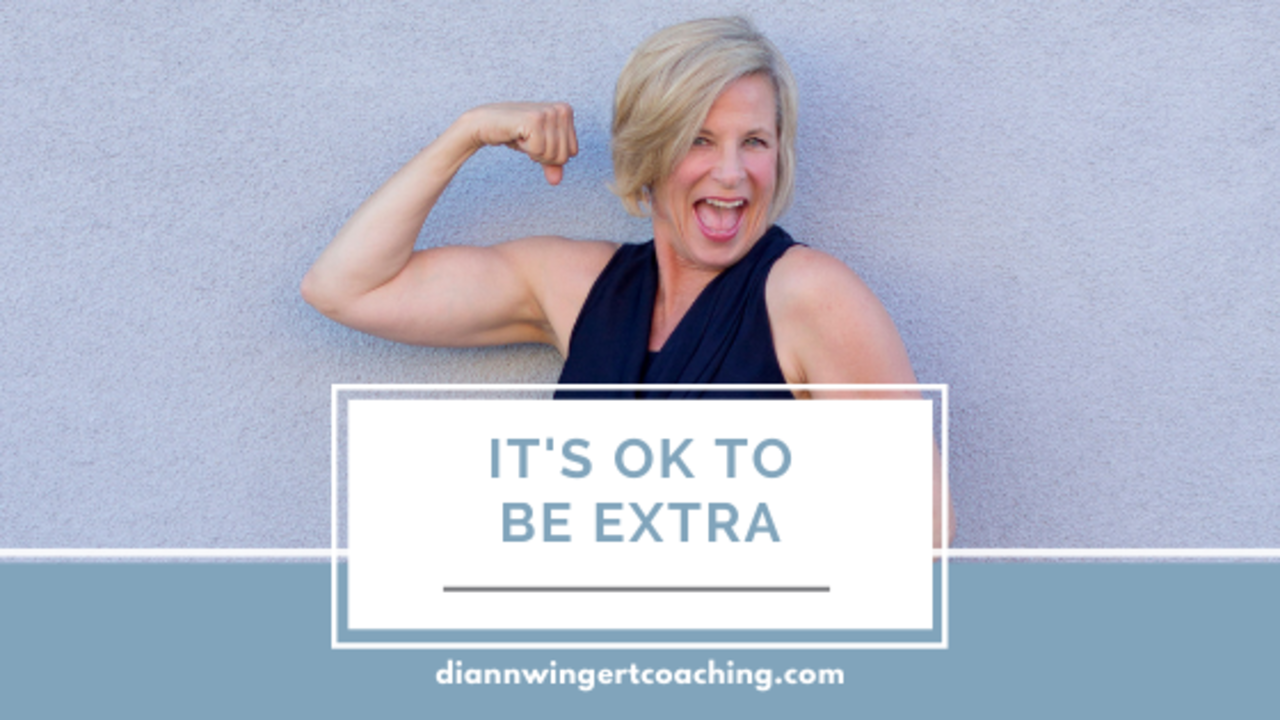 I have always been high energy, goal-oriented, ambitious person who simply can't stay in one place and have been on a lifelong adventure of continuous personal evolution. But, I didn't always label my drivenness as a positive trait, as I do now. In fact, it took me many, many years to fully embrace who I really am, without trying to slow down or play small to make others more comfortable. And I got lots of negative feedback that told me I was not OK the way I was.

Like most kids who grew up in the suburbs and attended public schools, I learned that being quiet, sitting still, raising your hand before asking questions, not too many questions were some of the rules of the classroom. But I had a hard time with all of those rules. I was a voracious reader, learned very quickly, and often wanted a deeper level of understanding about the material being presented. My hand was always up in the air, with yet another question.

I imagine that if I was a teacher, it would be rewarding to have such a highly engaged student who was so eager to learn, but what I heard instead was "Why don't you give the other students a chance, Diann?"  What this taught me was that it was not acceptable to be too curious. It took me many years to recognize that some authority figures don't like questions because they feel they are being challenged. The message I got was that I was too eager, too curious, too enthusiastic about learning. This was terribly confusing because wasn't I in school to learn?

Oh, and the sitting still part? That was a challenge too, especially when I had already completed the work and wasn't allowed to read a book or doodle quietly at my desk. In fact, one of my report cards included the comment: " Diann is very bright, but she will never learn anything unless you tie her to the chair." Once again, shaming the eager, interested student for being too fast, too demanding, too much. Stay in line, follow the herd, be like the others. That was the message and I tried, oh how I tried.

Years later, in grad school, I was sitting in a lecture hall and really enjoying the guest speaker, a visiting professor sharing some fascinating information on abnormal psychology. I was devouring every word and capturing the best of them in my notebook. I was also simultaneously highlighting an article for another class and balancing my checkbook, completely unaware that there was anything the least bit abnormal about my conspicuous multi-tasking, until the student to my right leaned over whispering, " Do you HAVE to do that?"

By that point in my life, I had become somewhat self-conscious about my "extra" nature and thought I was flying under the radar of others’ disdain. Apparently not low enough.  Once I found out I had ADHD, it made complete sense why I am always in momentum, always changing things up, always taking risks, and embracing something different. When I run into someone I haven't seen in a while, I never ask the typical " How are you?" Instead, I instinctively ask "What's new?" Because new is what I am interested in, always.

I used to think there was something wrong with me that I had zero desire to stick with the same career, the same friendships, the same interests, habits, and hobbies for decades like so many others. After all, isn't that the example of how we are supposed to live our lives? Commit to things and stick with them? But I just couldn't and can't. And I finally came to a point where I realized it is only a problem if I think it is, and when I care too much about other's approval.

That realization was the beginning of my personal transformation from a lifetime of believing I was too much - I did everything too fast, I talked and especially laughed too loud, I was always too busy, utterly too distractible, too curious, too outgoing, too ambitious, too intolerant of boredom and sitting still and too insatiable for learning and experiencing the new, the shiny, the latest and greatest whatever caught my interest. Until one day, I simply decided that I wasn't too much. I was just right. For me.

The day I decided to stop believing that I was broken was the day I started looking around and realized I was not alone either. There were other women (and men) just like me. And they aren't broken either. Once I realized that it was perfectly OK to be an outlier, things started to dramatically improve in the self-esteem department. For one thing, I stopped trying to please other people by holding back parts of myself. I just let myself be myself and if they didn't like me, there wasn't a problem.

One of the things I realized about spending so many years trying to blend in, fit in, and be like everyone else was that I was never any good at it. I am just not a blender. For one thing, I am 5'10" tall, and that's before putting on my 4" heels. I even had a woman confront me with the question " Don't you think you're tall enough already?" as though I had some sort of unfair advantage in the height department and had the nerve to add another four inches to my total.

I used to be ashamed of the fact that I outgrow things (and sometimes people) over time. I've had three careers, three husbands and even changed my religion when I realized I no longer believed as I once did. People get to know you at one phase of your development and think they know you, but all they know is the current version of you. If you are a person who is driven to continuously learn, grow, and evolve, a year later, they will no longer know you. Because you will no longer be the same person. This can be very confusing for people who aren't wired the way you are.

Sometimes you have to let them go because they keep trying to pull you back to that earlier version of yourself, the one that they "know." This is one of the more painful realities of being driven. You have a lot more losses to deal with. Or you hold yourself back. I have found that incurring the losses is sad, but holding myself back is just depressing.  And it's the kind of depressing that demands you do something about it, because even if it's hard, you can.

Sometimes I feel like a lone wolf when all I really want is to belong to a wolf pack. I have started looking for my wolf pack and may need to start my own.  I don't have to be the pack leader, but I probably will be.  One thing I know for sure is that I just can't live comfortably among sheep anymore.