A Hare in a Tortoise Suit 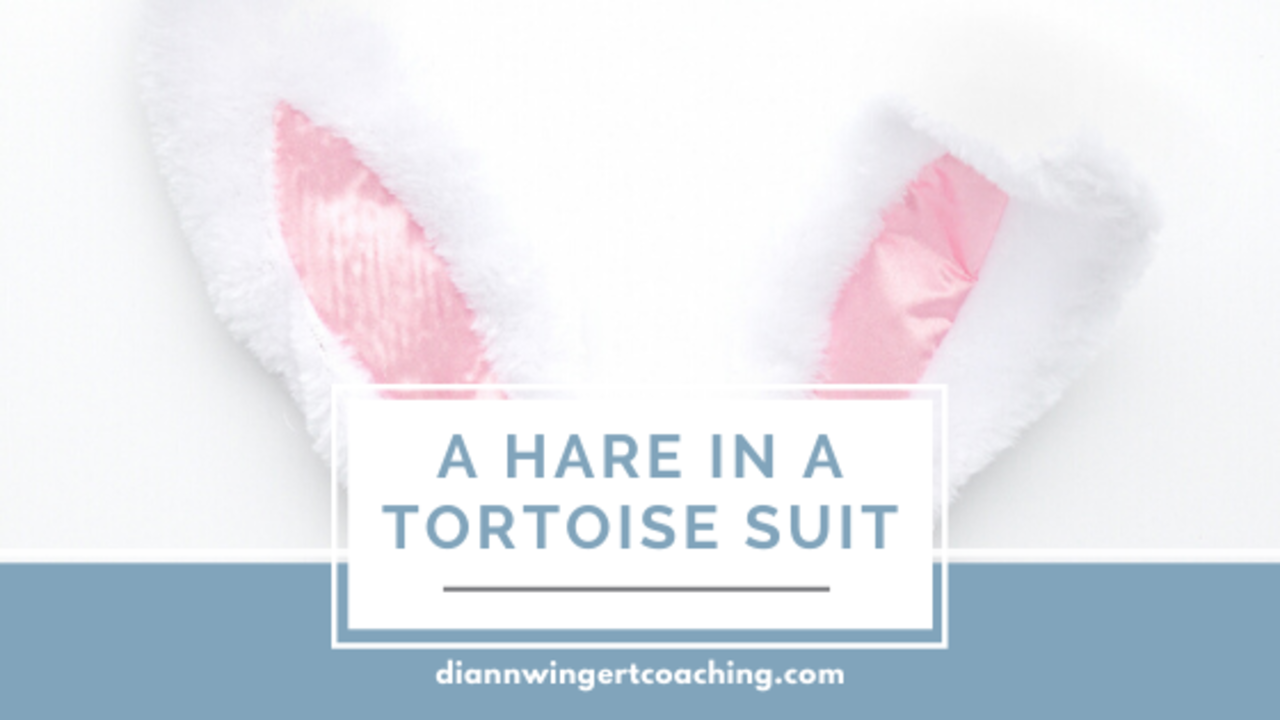 We all want to reach our goals faster, take the shortcuts and get more done. After winging it for years, and relying exclusively on my high energy and workaholic tendencies to pull me forward, I finally admitted that I needed a system. It wasn't that I couldn't get shit done, on the contrary. I could produce more than three other people combined, and make it look like magic because I did it so fast. It's just that those periods of killer productivity only seemed to happen when I was staring down a fast-approaching deadline with serious consequences for missing. And when I didn't have one, I could find every excuse on the planet for keeping myself "busy" but basically not doing the things that really move the needle forward. It was a vicious cycle.

So, I faced the fact that even though I was a hare, it really is the tortoise that wins the race. She may be slower and not as sexy, but she never gets distracted from her goal. She just keeps plodding along. While the hare, on the other hand, could run like the wind, as long as there wasn't anything else to grab her attention along the way. Once that happened, all bets were off. And I eventually noticed that there were quite a few tortoises in the winner circle and relatively few hares. So, I decided to rip a page from the Tortoise's Guide to Winning from the Slow Lane and teach myself how to be consistent. I did it by creating habits. I made rules for myself that were non-negotiable. Then I created rituals around things I wanted to do, not when I felt like it, but routinely so that they would become unconscious habits and I would just do them automatically, without a whole lot of mental effort spent on deciding whether to do them or not.

My morning routine got dialed in, my evening routine too. I learned to manage my time and my energy so that I could get things done on a consistent basis, instead of haphazardly. I didn't realize it for a great many years, but I kept myself playing small, holding back from going after the things I really wanted. It wasn't because I was afraid to be successful and I didn't have imposter complex. The bottom line is that I knew I was really smart and creative and hard-working, just not on a regular basis. I couldn't count on myself to be able to show up at a higher level of performance on any kind of consistency, so I didn't try to uplevel. Yeah, I felt sad about that and sometimes I was jealous when I saw others pass me by who didn't have the same level of talent that I had. But after a while, it just wasn't comforting to keep thinking "I would have done a better job than her" when a competitor published a book, launched a podcast, delivered a

speech or built the business that I wanted to build. Because the fact was, I didn't and she did.

Smarts, talent, expertise, creativity are nice, but they aren't enough if you aren't doing the work and doing it consistently. What's the point of being a One Hit Wonder? The thing about success is that it's not enough to set a goal and then reach it. Because once you get there, you need to set the next goal and then work toward reaching that one. And on it goes. It's probably why just as many people fail at starting a business at the same rate as people keeping weight off, once they lose it. You can't just decide to lose weight, follow a program, track your results, stay motivated, reach your goal weight and then what? Well, if you want to be successful at weight loss, right after hitting your goal weight, you set a new goal, maintaining it. People don't think that far ahead. They just want to reach their goal and celebrate having done so. It would be like starting a business. Once it starts and you begin to get customers or clients, then what? Are you done? Hell no, now you have to maintain that business and grow it over time. Or you will be out of business. Just like you will regain your lost weight if you don't maintain the effort of having lost it.

Consistency is not a sexy word. I get it. It sounds, well, boring. Having a goal and chasing it, now that's exciting. But if you aren't consistent, you aren't going to reach your goals anyway. At least not the big ones, the long term ones. The ones that will keep you in business for the long haul. I had to decide to become consistent because I realized I can start a business ( fun, exciting, sexy) but unless I adopt some of the behaviors that naturally consistent people have, I won't be in business very long. You might be a hare too. In fact, you might have already stopped reading this and starting skimming because you have been hoping I would share my ninja secrets for crushing your goals without ever having to think or act like a tortoise. And, I wish I had some. I really do. It would be amazeballs if I could be as successful as I want to be just relying on my sporadic bursts of fear-driven productivity. But, what I've discovered is that being successful is a lot like interval training at the gym. Alternating bursts of heavy-duty effort, with longer periods of lower-intensity effort. Done regularly. Consistently. Overtime. Without resenting it, questioning it, or trying to find another way. This IS the way. And it works. You've just gotta wrap your mind around it and make the decision to accept and embrace it. Once you stop fighting it, you can find a way to make it work for you. And when you do, you will be the smartest, sexiest, most badass hare in the winner circle.