Making a You Turn 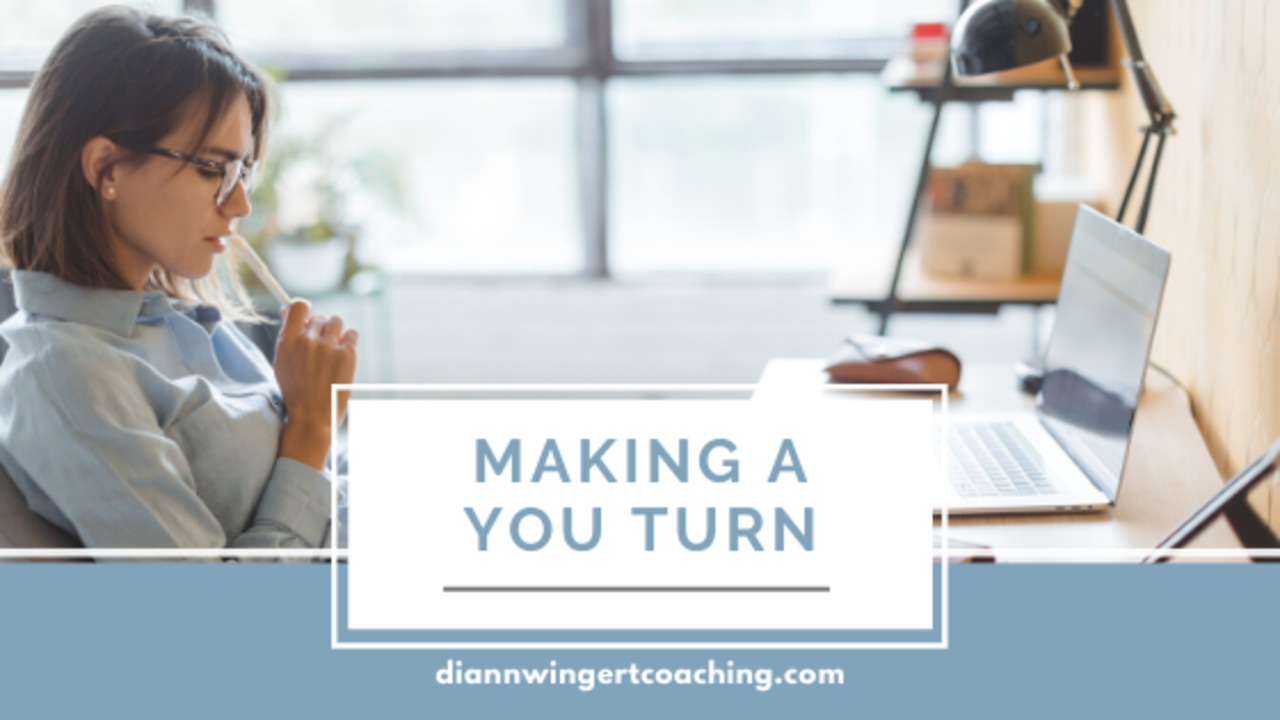 Most of us go through life with some kind of plan. OK, maybe it's not completely all figured out and there might not be a specific timeline or scheduled checkpoints along the way, but you have a direction and a pretty solid sense of where you're going. And then, seemingly all of a sudden, you find yourself questioning everything, feeling a bit lost and spinning your wheels. If you're ever been through this, you know how disorienting it is and how much confidence gets lost in the process. It's as though your internal GPS begins to malfunction after faithfully guiding you for thousands of miles. And then there you are, with no idea what to do or how to get yourself out of the park and back into drive again. And while it can definitely happen at any age and stage, there's an excellent chance that it's gonna happen in midlife, if it hasn't already. The year I turned 40 was when it happened with me and it literally felt like I went from knowing who I was and where I was going to the sense that I had been abducted and woken up in someone else's life, with no clue how the hell I got there.

It took some time to get myself sorted out, and there was a lot of turbulence in my life around this time, but looking back on it now, I realize that what ultimately happened was that I had been living my life according to what I thought I was supposed to be doing and what I thought I wanted, but I had somehow lost myself along the way. The real me was no longer at the wheel, she was going along for the ride, and not even paying attention at that. It was time for me to wake up, shake things up and start taking responsibility for creating the life I actually wanted, instead of just following the rules, sticking with the plan, doing what everyone else was doing and then blaming everybody but myself that I wasn't overjoyed with what I had. I had to learn the hard way that you really can't outsource your personal happiness. It's an inside job. Your job.

I now look back on that time in my life as my wake up call and when I learned that I needed to make a You Turn. It was definitely not a U-turn. After all, you really can't go back to being a younger version of yourself and get a life do-over, unless you sign some kind of deal with the devil, who I don't even believe exists. And who really wants a U-turn anyway? All that would do is take you back to where you were, without keeping any of the wisdom and experience you have worked your ass off to gain over the years. No, I am talking about a YOU TURN, where you recognize you are not going in the direction or heading for the goal that you would choose now, given the person you have become. The direction you've been heading and the goal you've been pursuing was chosen by an earlier version of you. A version that knew a lot, but let's face it, you didn't know everything you do now. You're not a fortune teller. You can't predict the future. Nor can you predict how you are gonna feel in a situation you haven't ever experienced before.

A YOU TURN happens when you wake up and make a conscious, strategic choice to stop, reconsider and make a new choice, one that puts you at the front and center of what you do. A YOU TURN doesn't care too much about the path you've been on or how long you've been on it. The sunk cost of whatever you've been doing up until now is just your tuition in the school of life and has nothing to do with your future unless you choose to stick with the same path. Otherwise, it's called experience. Way too many people believe that there is something wrong with changing direction in life, whether it's in your career path, spiritual path or lifestyle. But what are you supposed to do when you have outgrown the path you're on? Stick with it just because other people think that's more admirable? That sounds like a recipe for depression, resentment, and some heavy-duty deathbed regrets.

The truth of the matter is that there are a shit ton of people who have outgrown their path, but relatively few that have the guts to admit it. And admitting it is the first step toward doing something about it. Making a YOU TURN means owning up to the fact that you've grown and changed and sometimes sticking with what you've been doing is gonna feel like you are wearing your little brother's shoes. You might get where you wanna go, but it's gonna hurt you every step of the way. Having the guts to admit you've changed your mind or you want to try a new adventure, experience a different way of life or make your living expressing some of your other gifts is a beautiful thing. Growing is always good. Even when people don't approve. Maybe especially then, because it really makes you think about the choices you're making when you're getting that much pushback. Don't let anyone tell you it's just a midlife crisis. Sometimes, when its time to grow, you've gotta go. Make that YOU TURN, your future self is gonna love you for it.