Flies on the Windshield 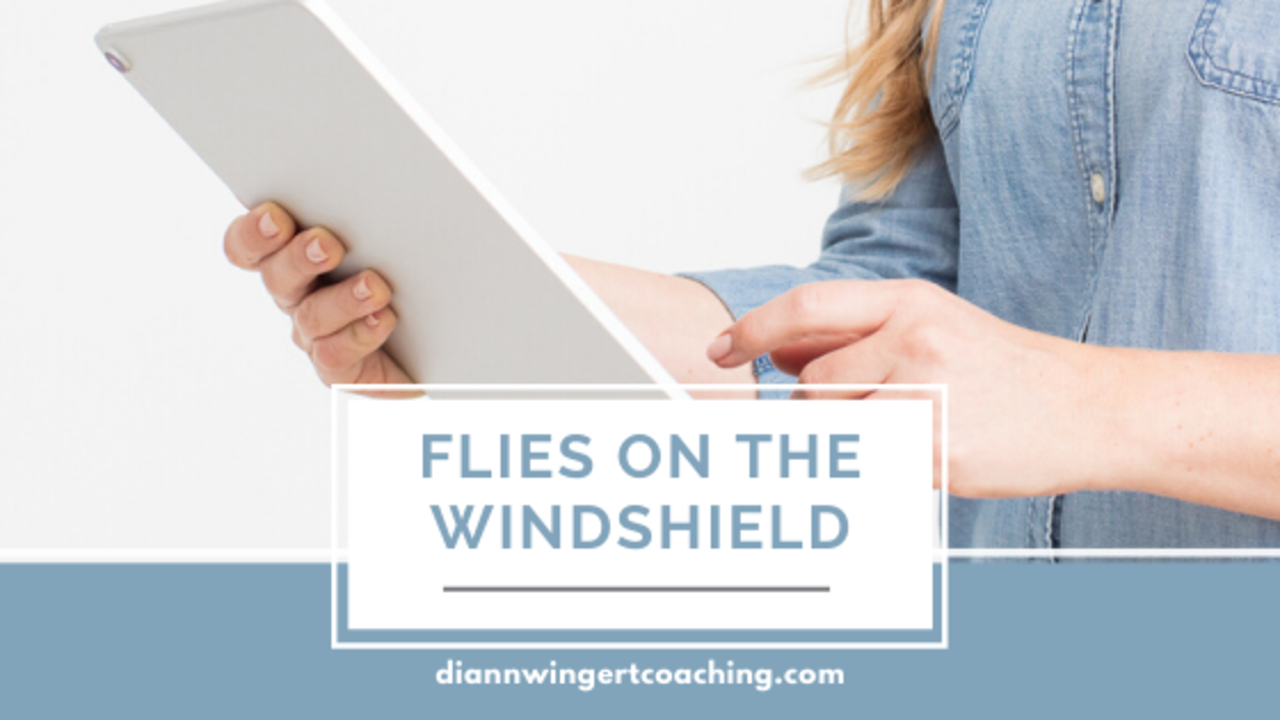 Sooner or later, you're gonna encounter a fly on the windshield situation. Every driven woman does. It's pretty much inevitable in business, and in life, in fact, if it hasn't happened already, it's just a matter of time. I'm not trying to scare you or piss you off if that's more your style. It's just that I learned so much the hard way and I want to show you all the shortcuts and point out all the blindspots I didn't know about, so you can get where you want to go without so much engine wear. If you know what to watch out for, you might still decide to take your chances and wing it. But, at least you won't waste time questioning the universe about why this shit is happening. You'll just get busy fixing it.

So, what I call a "flies on the windshield situation" is what happens when you are out there chasing your dreams, racing toward your goals, crushing your competition, feeling high on adrenaline and then BAM! All of a sudden, something unexpected happens and you can't see shit, the road ahead literally disappears and you basically have to come to a screeching halt. WTF. Now, it might be a simple matter of pulling over, grabbing a rag and window cleaning fluid and getting those damn flies outta your way. But what if you didn't remember to carry a cleaning stash for just such moments because you have long forgotten the Girl Scout motto you had drilled into you in the third grade- "Always Be Prepared."

Maybe you just didn't anticipate that something like this could happen. Hell, when you're moving as fast as you are, you probably didn't anticipate a whole lot that could go wrong, only the sweet smell of success when you cross that finish line. Yeah, I get it. I was that gal too. Every obstacle, big or small, always felt like an out-of-the-blue "Why is this shit happening?" kinda thing. The truth of the matter is that most flies on the windshield can not only be anticipated, sometimes they can even be predicted. And, we can always have a plan where we are prepared to deal with them, not cursing on the side of the road, trying to wipe that shit off with the back of our skirt.

Believe it or not, there are a ton of flies on the windshield moments that can be completely and utterly prevented so that your view of the road ahead is unobstructed. Now, that doesn't necessarily mean there won't be obstacles. This IS a business we are talking about. There will always be obstacles. But, at least they won't be the kind that causes temporary insanity and near-total blindness. So, what's an example of a flies on the windshield moment that can be eliminated? Well, what about this. Your flies on the windshield moment might be that you totally forgot to set an Out of Office reminder on your business email before going away on a two week trip to Bali. Then, you come back, open up your laptop, all nice and relaxed and tan, only to discover emails from 197 angry customers with issues, who feel you've been ghosting them.

It's not your fault, and that's not even the point. I mean, obviously, if people don't know you're off the grid and they don't get a response to their email, they get annoyed. You sure would. And just multiply that reaction by the number of potential customers who might reach out during that two week period. That's a lot of flies. Opening up your email to THAT can feel like a shit storm just hit your screen and you could be temporarily blinded by it. You may just freak out and start panicking a little. You might even start catastrophizing to the point where you're 100% convinced they are all gonna cancel their contracts, immediately. Flies. On the windshield. Lots of them. I don't know about you, but when something like this would happen in my business, my first reaction was to feel like a victim. My thoughts would go right to that "Why is this happening to me?" place, complete with whining to friends and a massive case of self-pity, usually accompanied by my favorite flavor of Haagen Dazs. As if ice cream ever solved anything.

And, when I was in that victim mindset, my brain just wasn't capable of coming up with any worthwhile suggestions for how to actually solve the problem. My boo-hoo poor me thinking just had me spinning around in circles, feeling sorry for myself and avoiding reaching out to my customers because I was in no mood to deal with an angry mob. I mean, I was still in vacation mode, for Chrissakes. Fight or flight had set in, which meant I was only able to think about how to run away from the problem (which is exactly what I was doing, by avoiding the customers who had emailed) or fire off an angry response in return, I mean what kind of monsters can't see that a hard-working girl deserves a break once in a while?

Fortunately, I was able to calm down long enough to have my logical, rational brain to come back online before I took action. Well, I was taking action ( calling and complaining to my daughter and a friend, or three). It's just that it is more like inaction than action because it didn't actually do anything to address the problem. I was hiding out and indulging in my self-pity. It felt good at the time. But, like all forms of indulgence, it was just buffering me from reality. I had a problem that needed to be addressed. And, one that I actually brought on myself, even though it felt like I was attacked by forces beyond my control. Flies on my windshield.

So, the moral of the story is this. Spend some time on a regular basis, planning ahead, anticipating the future and even guessing at what could go wrong, so that you can be a good little Girl Scout and always be prepared. If everything goes as planned, you're in luck. But winging it and expecting to be lucky is not a business plan. Or a life plan. It's an accident waiting to happen. And accidents are always costly, either in money or time or both. So let's keep your windshield fly-free. Think ahead. Imagine the unexpected. Create a plan. Then expect to be surprised. And then delighted at how well prepared you are. That's thinking like a boss. And combined with your killer drive, it's an unfair advantage.