So Many Ideas, Not Enough Time 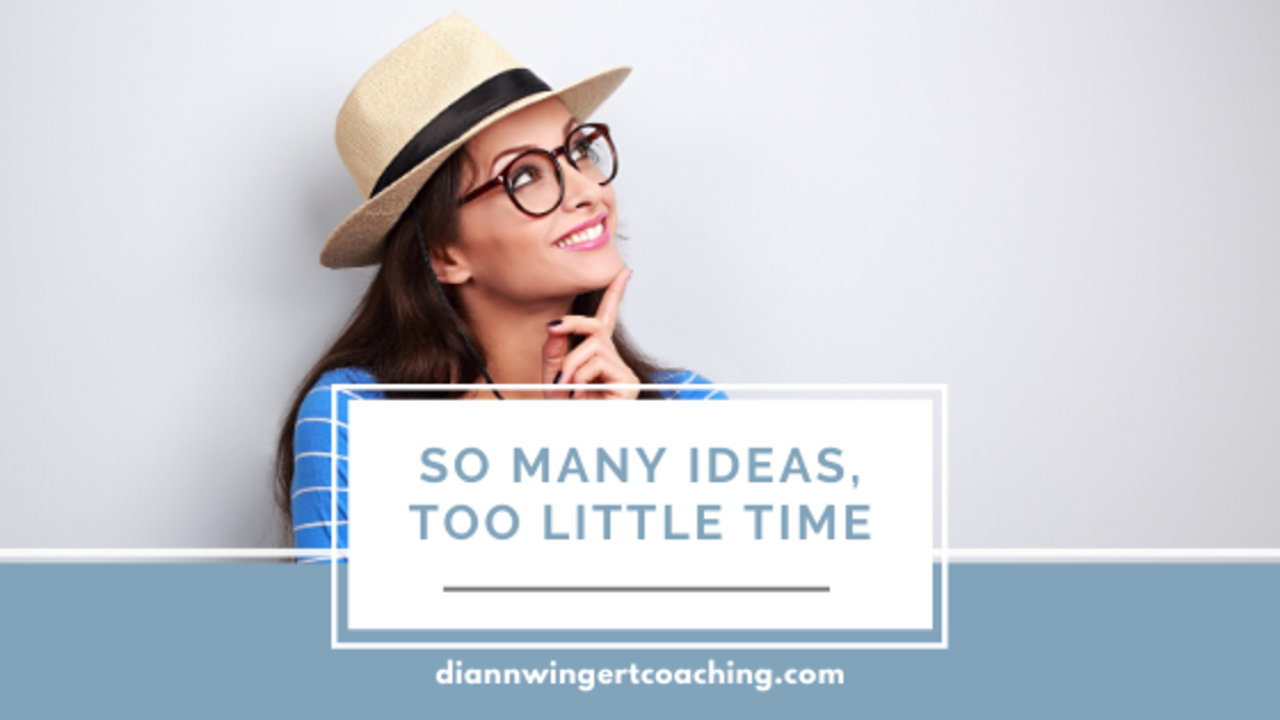 I'm a wordsmith. Words and the pictures, stories, metaphors, and analogies that I create from them are my playthings. There are so many things I just can't do. My short term memory sucks, I have zero sense of direction, my math skills are weak and I have a helluva time following directions of any kind, especially written ones. I could go on, but the point it this- I excel in the realm of verbal skills, at something like the 97th percentile on the standard IQ test. There is nothing I love better than playing with words. I love a great advertising tag line, a unique combination of words that form a business or product name. Hell, I go crazy reading row after row of the names for paint colors, when we recently started a kitchen remodel. That's how much I love me some words.

One of the cool things about being a wordsmith with ADHD is that I spontaneously think of clever things and blurt them out, especially when I am with people I like and some kind of alcohol has been consumed. It doesn't take much. My brain sees connections and comparisons between things that other people don't see, but when I point them out, they think I am ever so clever. It's a fun and easy way to get attention and impress people, without being completely obnoxious, at least not most of the time. I didn't even notice for years that this ability is kind of special and not everybody has it. Ever since then, I think of it as a gift, rather than a skill. After all, I did nothing to earn it, it came with the package, at birth. I have developed it by being a life long learner, following my curiosity wherever it leads me and traveling and interacting with people from around the world. Words need impressions in order to grow. If I wasn't constantly feeding my brain new information, I wouldn't come up with new expressions. I can't prove it, but that's my theory and I'm sticking with it.

This ability also extends to being really good at coming up with naming stuff. I'm not particularly good at coming up with the typical stuff like baby or dog names, but if you are writing a book, starting a podcast, creating any kind of business or product, I'm your girl. It happens even when I'm not trying, in fact, that's when my best ideas usually come. If I put myself under too much pressure, the faucet on my creative flow gets stuck. I have named my husband's and former husband's businesses, helped a number of friends name their businesses and have dozens of ideas saved in various files and folders on my phone and laptop. But here is where this seemingly magical gift has actually been a source of emotional suffering. A client I was working with last night brought up the topic and it reminded me of how I've really had to change my thinking about this ability so that it is no longer, or at least only rarely makes me feel guilty, sad or ashamed.

When you have the kind of brain that is constantly overflowing with ideas, which in my case come in the form of words, at first you think you just need to write them down or capture them in your device in some other way so that you can come back later and act on them. Especially if you are a creative or an entrepreneur, the ability to generate good ideas is a must. I have thought of my good ideas as fireflies that I need to catch and put in a jar or butterflies that I need to capture in my net. I've also thought of them as the flame from my Bic lighter, coming to me as easily as a click-click-click, but unlike the lighter, there is no end to the supply.

I have filled dozens of journals and sketchbooks with my ideas, followed by hundreds of files and folders on a series of desktops and laptops. There have been so many of them that I honestly took them for granted, not recognizing their value and collecting them rather compulsively, but with no real thought or plan for how I might use them or when. I usually don't even go back and look at them, once they have been captured and placed in the ideal parking lot. It turned out to be a habitual lie I told myself, "I'll come back to this later." Later became never, almost without exception.

My great ideas were being squandered and ignored. At one point, I thought of them as my Idea Children and I realized that I was a neglectful mother. This realization triggered feelings of guilt, shame, and sadness, especially as I was getting older and I realized that time was not actually unlimited. What if I died before acting on even one of them? This could have made me simply want to give up and stop producing clever ideas.

Fortunately, it did the opposite. I made a commitment and a plan. I would choose an idea and act on it, seeing it through, all the way to the finish, bringing one of my idea children to life. Once I had done it the first time, I told myself, I could choose another and do it again.