More Than One Way to Be Queen 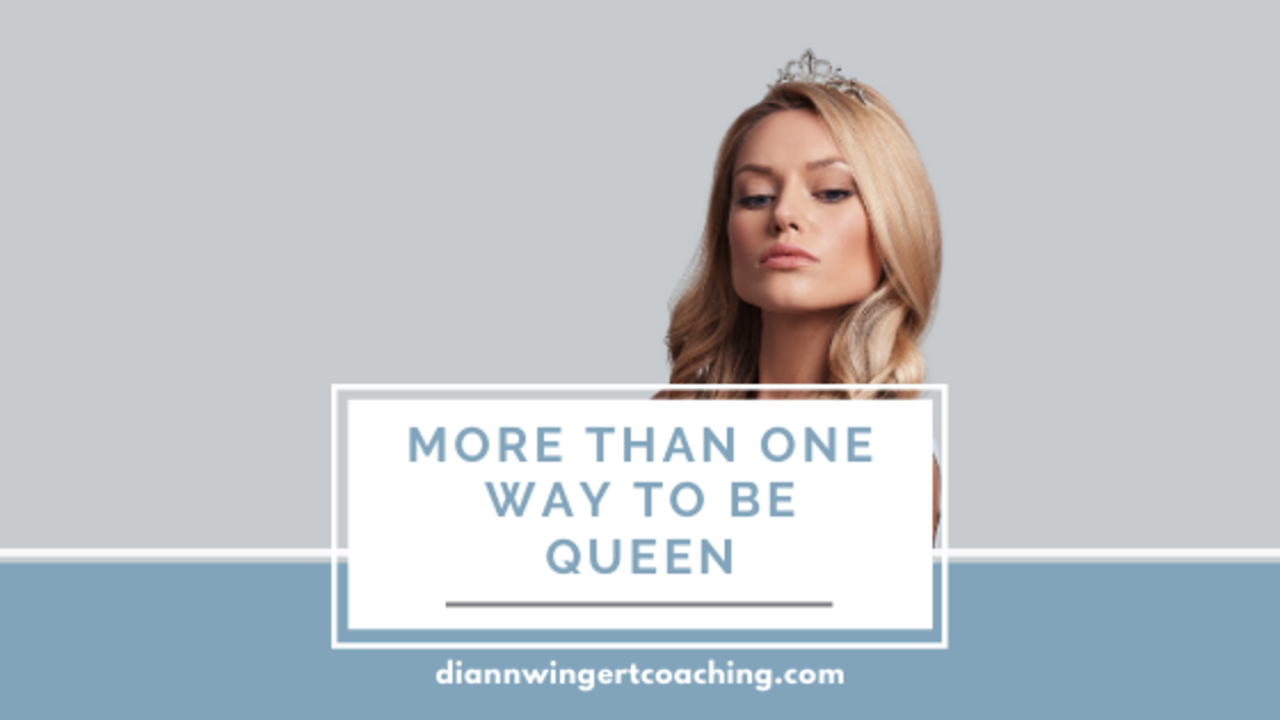 Season 8 of the hit show Game of Thrones has come and gone and my Sunday nights will never be the same. No longer will I be keeping company with dwarves and dragons, incest and beheadings. I must admit I went through the five stages of grief and loss, even though no one has died. Well, actually lots of people have died on this show, including the deaths of some of my favorite characters. The end of the series was also the end of the lives of some of the most vivid characters. These deaths and the characters who experienced them will continue to be discussed and debated for some time to come by the most faithful of the GOT fans.

It is the only series I have watched faithfully, from beginning to end, looking forward to each new season, and gathering with friends to take in each episode together and then talking about it afterward, over glasses of wine. I've never been much of a fangirl, but this show was different from the rest. The characters included eunuchs, giants, dwarves, the undead, and fire breathing dragons and plot lines that included mass murder at a wedding, poisoning of a teenaged king at this own wedding, zombies, beheadings, incest, visions, being eaten by hungry dogs, castration and murdering your own father with a crossbow while he's sitting on the toilet.  I mean, really, what's not to love?

But, for all the excitement and adventure that Game of Thrones brought into my life for the past eight years, not to mention quality time with my friend circle, what I have thought about the most and honestly miss more than anything will be the show's fascinating female characters. Unlike so many other works of fiction, the GOT characters were complex and nuanced, multidimensional, and layered. If the show had been a simple contest between good and evil, it never would have held my attention past Season 1. And the most complicated, conflicted, and multifaceted characters were the various queens. Some were power-hungry and bloodthirsty, others were mild-mannered and gracious. But all of them were strong, courageous, and committed. I had my favorites, but I admired and identified with all of them, for various reasons. Here's why:

Cersei become queen when she was married off to a king by her father, Tywin. She had the misfortune of having two brothers, her twin, Jamie, and her younger brother Tyrion, the dwarf. I say misfortune because as a female, she would always be standing behind them in line for the throne. So, because Cersei was born a woman, the most expedient route to becoming queen was to marry a king and for that king to die. Luckily for Cersei, that's exactly what happened.

Cersei was always being challenged and opposed and had difficulty trusting others. You can't blame her. Countless people wanted her dead and would have dispatched her personally if given the chance. Cersei did despicable things but she allegedly loved her children desperately. Some of her fans were willing to overlook her horrific deeds because of the intensity of her motherly love. She desperately loved all four of her children, who in spite of the fact they bore the name of her husband Robert Baratheon, were actually conceived in incest with her brother Jamie.

I had a hard time liking Cersei, who could be incredibly cold and cruel, but I admired her for being true to herself. She had the courage to love who she loved, even though no one would approve of it and even caused her to be incarcerated, her head shaved and paraded naked through the city while commoners spat at her. She did not bend. She did not break. She waited until the time was right and then she got even.

Cersei was willing to lie, cheat, betray, manipulate, steal, murder, and do so on the scale of crimes against humanity to protect her loved ones. She was elegant and she was regal. To see her walk into the room was to know royalty. She was supremely confident and never questioned herself, even when she was dead wrong. That single-minded strength of purpose and willingness to do whatever it took at the moment is something few people possess, even fewer women. I didn't agree with her morals or her methods but she was a courageous character and I respected her for that.

For most of the series, Daenerys was the frontrunner in the popularity contest between the queens. She not only had a legitimate claim to the throne through her father, but she was also the undisputed goddess of the GOT franchise, with platinum hair piercing blue eyes, and an angelic face. She anointed herself the Mother of Dragons and the Breaker of Chains, conquering kingdom after kingdom by freeing their slaves and adding them to her willing army, before marching on to the next city to liberate.

Dani had one fatal flaw, however, which was revealed in the final season. When she was rejected, she destroyed those who rejected her. After winning over a city in battle, when two of the soldiers refused to kneel before her, renounce their former queen, and pledge fidelity to her, she incinerated them with her fire breathing dragon. Talk about a zero-tolerance policy for loyalty to her leadership.

I admired Daenerys for her idealism. She believed so strongly in her vision of the world and her ability to bring that vision to the reality that no matter how the odds might be stacked against her, she always ended up on top. Her own brother sold her off to a band of savages and she turned things around for herself by falling in love with their leader and becoming the queen of the tribe, learning their language, and winning their hearts. Every time she found herself in a challenging situation, she used her wits, charm, and resourcefulness to come out ahead, often to the surprise of the men who thought her to be a silly little girl.

Sansa Stark - Queen of the North

Sansa would take the trophy for Most Changed since season one. She was a fairly young girl back then, quiet, demure, and passive. She was the traditional feminine princess, born to a royal family, protected by her father and brothers, and righteous in her beliefs that good will prevail. In other words, she was protected from the real world, and as a result, unprepared to defend herself once she was forced to become a part of it. Of the four queens, she was the most insightful about people. She learned how to survive not one, but two sadistic husbands her family had her married off to, out-manipulated the master manipulator Little Finger, and managed to do so without ever engaging in outright conflict or confrontation.

Hell, for most of the eight years I watched her on-screen, her hair and makeup were nearly always impeccable. She had a grace and calmness about her, even in the most harrowing of situations and I think what allowed her to survive so successfully is her ability to read people and give them what they want while getting what she needed in return. Given how ambitious the other queens were, I judged Sansa as being a weaker character, preferring to see her half brother Jon Snow on the throne than herself.

By the end of the series though, I realized that Sansa actually knew who she was, and being queen was just not how she saw herself. A royal yes, married to power and influence and authority, living in a castle and raising the next generation of princes and princesses to be sure, but the queen was simply not what she aspired to. I came to admire her self awareness by the end of GOT. Not everyone is cut out to be queen and not everyone needs to wish they were one. Sansa had kept herself alive against the odds with Joffrey Baratheon and Ross Bolton and got to see both of them meet their justified ends. Neither of them would raise a family or grow old. But Sansa, oh yeah. She had what it takes to outlive them all. And with every hair in place in the process.

Yara was also born into a royal family and I can easily imagine that her father was deeply disappointed that she was a girl. So she took on the character and characteristics of her male siblings, and became a swashbuckling, whoremongering, drunken sailor and conqueror, winning many battles on the high seas. After her brother Theon was castrated, she was definitely the most masculine presence in the Greyjoy family. Yara was a true badass and a truly courageous warrior. You never saw her fearful or tearful, she never backed down and was quick to start a confrontation. She won loyalty from her men by being the kind of queen who gets right in there and fights alongside them, not by issuing orders from the throne.

What I admired most about Yara was that she was adaptable. She saw the disadvantages of being a princess so she became more of a prince. Even her father had to admit she was a better leader than his sons and her crew agreed. She didn't complain about the unfairness of her situation or try to manipulate men in traditionally feminine ways. She learned how to compete with them at their own games and fight to win. Yara was rough, tough and intimidating and could hold her own in any confrontation. She saw what needed to be done and did it, never asking someone else to do the job for her because she was the queen. She was one of the people, not above the people and they would defend her right to the iron throne with their lives out of respect for this fact. It was easy to see why.

So, if you were a GOT fan, did you have a favorite queen?  Did the qualities she expressed remind you of yourself or someone you aspire to be?  Even though Game of Thrones was pure entertainment, I always get a lot of satisfaction out of the character development piece of such an epic, many years series.  Each of the GOT queens gave me someone to be inspired by and to think about which of my own qualities need more development and others that might have had their reign and now need to step down from the throne.