Hope has Nothing to do With it 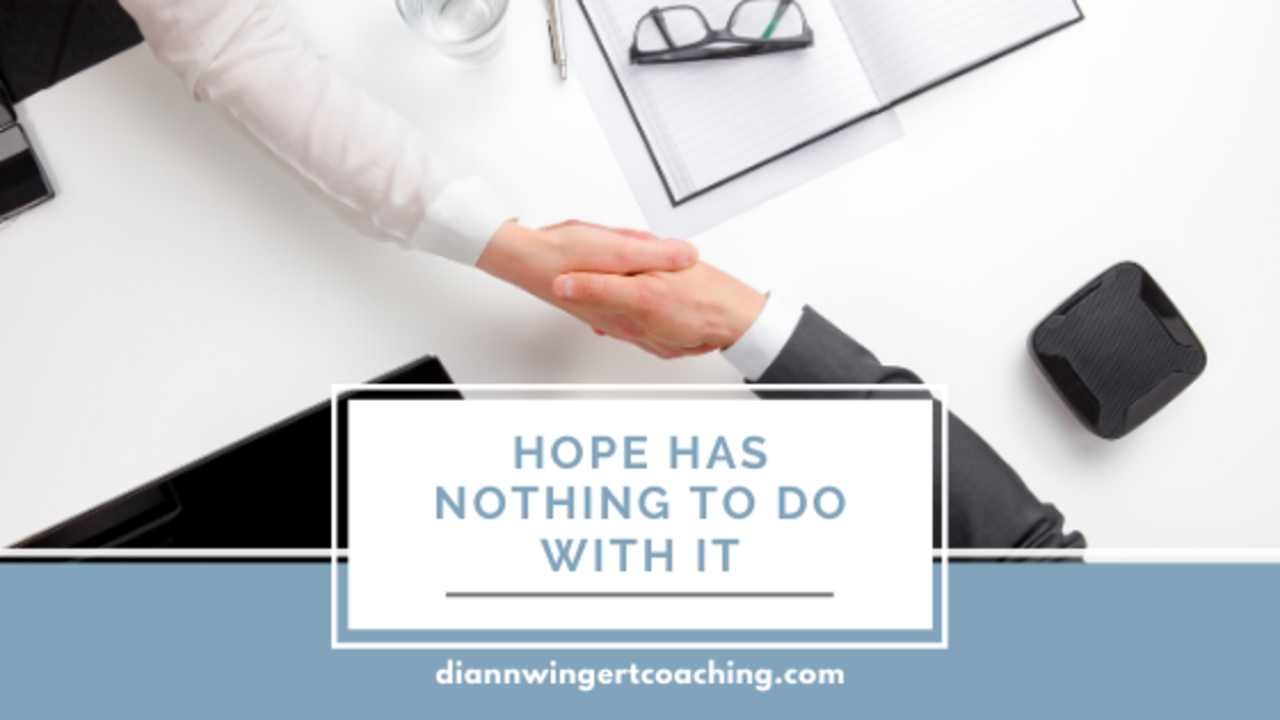 Nearly every person I know has a great, big shiny dream. They can envision themselves living the new life they will have when this dream becomes reality and often daydream about it happening "someday.' Whether they want to start a business, live in a foreign country, adopt a child, go back to school or transform their health, most of us long for something we don't have and believe our lives will be better, happier or more satisfying when we do. And the majority of us won't ever see those dreams come true.

I hate to be a Debbie Downer, but I know a bit about human nature from having been a therapist and coach for well over two decades. I have spent literally thousands of hours with hundreds of clients talking about what they believed was wrong with themselves and their lives. Along the way, I stopped seeing any value in talking about the past, what went wrong and what isn't working and always attempted to steer the conversation toward what is going well and what they want more of in the future. It's one of the main reasons I stopped being a therapist and got trained to be a coach. But, I soon learned that talking about what we want in the future is not enough. While it's true that we need a clear picture of our dreams and goals in order to move forward, it's not enough.

There are plenty of people that believe we can make out dreams come true by having a crystal clear image in our minds, often facilitated by journaling, meditation, vision boards, and other techniques. Once our vision is clear, we set our intentions, align our energy with that of source and seek to manifest the outcome by drawing it to us magnetically. Now, I am not especially woo woo, but I don't discount the spiritual entirely. I think of myself as half a woo, which means I believe that we are energetic beings and that unless we truly believe an outcome is possible and that it's possible for us, it simply won't happen. That being said, we can meditate, vision board and magnetize all we want, but I just don't think it's enough.

What's missing in most cases, IMHO is a genuine commitment, consistent action, the willingness to fail and flexibility. These are both traits and skills and while they may come more naturally to some of us, all of us can develop what we have in each of these areas. Let's start with commitment. I thought I knew what commitment was, but I witnessed it one day just a few years ago at a coaching workshop. The leader asked all of the trainees in attendance how committed we were to making money. Everyone raised their hands. Then she asked if we were willing to take any action in order to bring more money into our lives. This time, about 90% of the room raised their hands. Next, she asked if we were willing to put ourselves out there and declare our desire for more money, no matter what others might think of us. Fewer hands were raised and the tone in the room was starting to become more serious.

The final question was are we willing to take a risk, even when we had doubts. This time, only about 70% of the room had a raised hand. Every person there had paid a lot of money to this coach trainer, one of the highest-paid life coaches in the country. We all wanted to learn her secrets for making money as a life coach because, despite the popularity of the life coaching industry, a tiny percentage of life coaches are making a lot of money. The growing feeling of tense anticipation was evident. There was a hush while the trainer smiled and looked around the room. What happened next took me, and I suspect most of the room by surprise. This was by design. She pulled her handbag out from behind the podium. Drawing a crisp new $100 dollar bill from her wallet, she flung it into the air and it rose high, then floated quickly downward, just in front of the first row of seats, a few feet from the stage.

One of the attendees leaped out of her seat and grabbed the hundred dollar bill before most of the others in her row ever had the chance to even consider doing so, while the rest of us watched, trying to process what had just happened. The trainer smiled in acknowledgment and asked the young woman, now clutching the hundred dollar bill, looking quite triumphant to join her on the stage. The trainer invited the woman to introduce herself, using the microphone and asked her to share her thoughts about what had just happened. Her response was that she didn't really think, she saw the hundred dollar bill in the air and she simply acted to grab it.

The trainer then told her it was hers to keep. They hugged briefly and the young woman took her seat. The trainer then spoke simply to the entire gathering, stating "THAT, my friends, is commitment."