Crowdsourcing Your Self Esteem 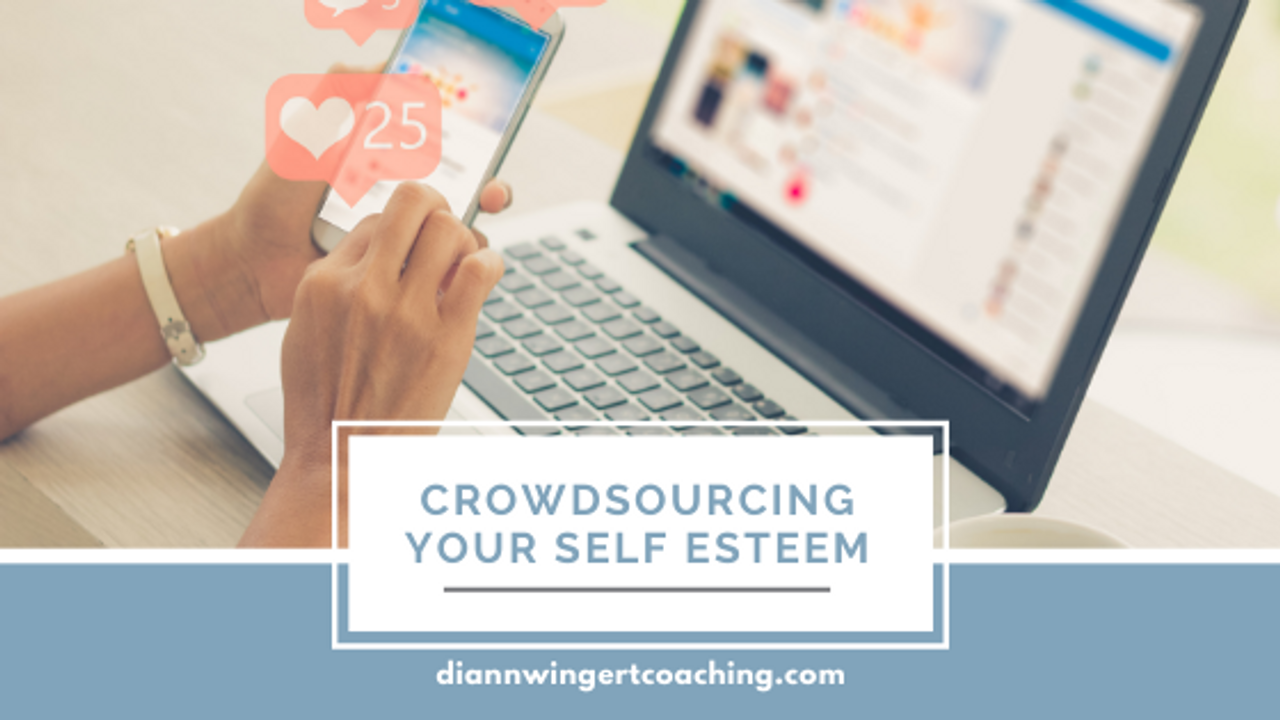 Even though I am fascinated by the internet and its impact on culture, I am deeply grateful that I grew up before this digital age. It was hard enough navigating adolescent angst, sexual exploration and trying to figure out who the hell you were and what you wanted, all before senior ditch day for my generation. It seems infinitely more complicated today. As I observe the pressures experienced by Gen Y youth through the eyes of my nieces and younger clients, it's not the least bit surprising that they are so anxious, worried and insecure.

Adolescent and emerging adult women and individuals identifying as women are the most impacted by these pressures, from my observation. Social media blasts them with messages like 'The Future is Female, telling them they can "have anything, be anything and do anything" as long as they want it bad enough and manifest it hard enough. WTF.

Heavily produced and funded marketing campaigns urge them to "see themselves and be themselves", even though most of them are years away from knowing their ass from their elbow, metaphorically speaking. Hell, the human brain isn't even fully developed until the age of 25. TWENTY-FIVE, folks. That's light-years away from the legal right to consume alcohol, marry without your parent's consent or be all you can be by enlisting in the military. That's why auto insurance rates drop dramatically at that age, BTW.

I belong to a number of online communities for female entrepreneurs, makers, freelancers, side hustlers and creatives of all kinds. These groups tend to be populated by the most sensitive, intense, and neurodiverse individuals, the ones who are brave enough and perhaps crazy enough to try to make a living by making art or meeting a market need with their own product or service. At least once a day, I pause my scroll to examine the post of some sweet young thing, putting out a request to the group at large, saying she can't decide if something is 'good enough."

The typical post consists of four graphic images, headshots, logos, handmade earrings, book covers, or coaching program offers. The plea is always the same. 'I have been spinning my wheels for days/weeks/months/years trying to figure out which of these to choose. Until I know which one is the best, I can't move forward with my website/Etsy shop/cards/ branding/business. Please don't tell me that they all suck. I have spent so much time and money on this already, that I would be devastated if I had to start all over.'

The first time I read one of these posts, I felt compassion and even identified with her a little. After all, it takes some real girl balls to make something and put it out there, risking rejection and the very strong possibility of failure. But there are mindsets and behaviors that lead to success and others that lead you away from it. Take a guess whether successful entrepreneurs and creatives ask random people in a Facebook group to evaluate their work. This is what I call crowdsourcing your self-esteem. It doesn't lead to clarity and courage, it only brings more confusion. And the tendency to keep posting and keep asking.

Let's just say that everyone in the group is a potential client or customer ( a big leap, I know). What if the fledgling creative posts four different logos and asks which one the members of the group think is best? First of all, only a small percentage of individuals in the group will even reply, for reasons of their own that might have nothing to do with wanting to help this stranger with her business. Or even if they are well intended, they might have lousy taste when it comes to matters of design and style. Is the feedback valuable? And, what if there's a tie between two logos, or all four get roughly equal votes.

Successful creatives and entrepreneurs invest in their business, but they don't spend thousands of dollars hiring coaches, consultants, and various gurus to flatter them and 'inspire' them so that they can keep putting one high heeled boot in front of another. Those that become successful also don't get seduced by vanity metrics, buy Twitter followers or get on the email list for every 7 figures in 7 weeks webinar, either.

Writer Joseph Epstein has been quoted as saying 81% of Americans say they want to write a book. I'm sure you can guess that the percentage of Americans that actually write one is a mere fraction of that. I also read that less than 3% of the people that actually do start a book make it all the way to finishing it. I'm willing to bet (big money if I had it...) that none of the finishers crowdsourced their book title, cover art or page length.

Hey, I'm a big believer in the guidance, support, and accountability of working with a coach, consultant, mentor, mastermind or creative community. I've invested five figures each of the past few years on these folks, and for the most part, I would do it again. But, after all, is said and done, every certificate earned, course completed and hug collected, I am left with the awareness that there is really only one thing to be done. The work. The actual work. The art, the book, the painting, the textile wall hanging, the speech making, the product launched to a waiting public or to crickets.

There is no amount of Facebook group feedback that can replace that or even make it any easier. For every person who loves your shit, there will be at least one that hates it. Count on it. Accept it. Hell, embrace it if you can. But don't think for one slim second that you can sneak past it, outsmart it or shore yourself up with enough likes and shares to take the gut-wrenching fear out of it. It's just part of the deal. And outsourcing your self-esteem won't make you any better at dealing with it.

Be the 3%. That's how you learn to tolerate judgment, criticism, and failure. Do something that makes you proud. Stand up to your fear. Wet your pants if you have to, but don't go home if you do. ( I just saw an ad for a new brand of panties that can hold up to 4 oz of 'liquid', so you'll be fine no matter what.) Decide to vote for your own shit. Don't ask others what they think. The only opinions that matter are your customers, anyway. The ones that open their hearts, their lives and their wallets to support you. Ask them and only them. This isn't crowdsourcing,  sweet cheeks, it's just business.