What I Learned About Sales from a Homeless Guy 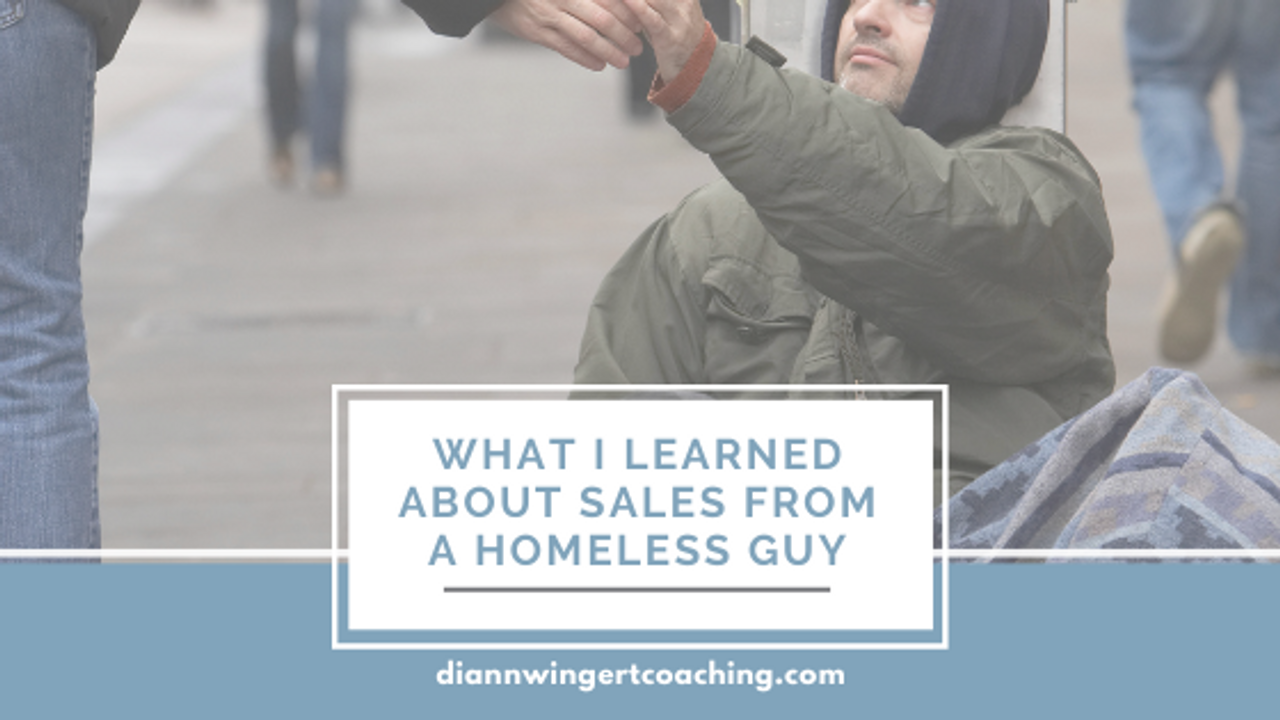 When chatting amongst my coaching colleagues, the comment I hear most often when the subject of sales or selling comes up is how much they hate it. And even when they don't hate it, they wish there was a way to sell that didn't feel 'salesy'. Many coaches I've met just really love coaching and believe they are skilled at it, but absolutely can't stand to sell. This leads to only two possibilities -they have a coaching "hobby" ( it's not a business unless you have income) or they work in someone else's coaching business, who does the selling for them, at a 50% commission. My opinion is that anyone who is in business for themself is in sales, whether they are a coach, a public speaker, a graphic designer or an ebook author. I would even go one step further and say that basically everyone is in sales, in at least one area of their life. Parents sell their children on doing their homework and eating their vegetables, attorneys sell juries on the their clients and ministers sell their congregations on morals and charity.

This belief that selling is somehow slimy and sleazy is a common one, largely because most people are afraid of selling and even more afraid of being sold to. Most people will do everything humanly possible to avoid being rejected. We also run as far away from feeling stupid as we can. Nearly everyone can recall times when we felt taken advantage of, mislead or coerced into a transaction that we didn't feel good about after the ink was dry. Often times this occurs because the salesperson had a more astute understanding of our unconscious needs and drives than we did, like the time I stopped into the skincare salon for a moisturizer and walked out with an invoice for a series of 6 anti-aging facials because I was uncomfortable with the visible evidence that I was getting older.

The other reason we have an aversion to being sold to is that we have shitty boundaries bordering on co-dependence with complete strangers, in other words, the expression, 'no, thanks' hasn't worked its way into our vocabulary. People pleasers are best served through online shopping, at least until there are artificial intelligence cashiers instead of 1 click to buy buttons. I think most of the negative comments I hear from coaches, creatives and other self-employed and entrepreneurial folks is because they project their negative experiences with being sold to and assume their potential customers and clients feel the same. Good selling starts with a good attitude, along with respect for the other person. They are first and foremost a human being with wants and needs not so different from your own. This mindset is very different from seeing them as a lead or a prospect.

As for me, I don't mind selling. I'm confident about what I have to offer and my ability to explain it to a prospect in a way that demonstrates the features, benefits, and value. I also don't have the goal of selling every potential client. I believe that when it comes to coaching, I need to be the right person, for the right reason, at the right time. If I can't check off all three of those boxes when I am sharing an offer, I don't invite that person to work with me. I've learned the hard way that if you're good at sales, you can convince people to hire you, pay you, work with you or buy your thing when it's just not right for them. If it's a product, you can look forward to refund requests, complaints, bad reviews and more. If you're in a service business, that's even worse. A reluctant prospect that you closed against their better judgment or just plain readiness to do the work can quickly turn into your biggest nightmare. I like to think of skillful selling as problem-solving. Your prospect has a problem or a need. You offer a solution. Done well, it's a win-win. And it starts with your sales attitude, not aptitude.

When you pay attention, sales and selling are going on around you, all the time, and I'm not just referring to retail and advertising campaigns. Sometimes, they catch my attention and other times they sneak up on me. Because it's December, the sales vibe is high all around us. Stores are offering discounts and specials, service businesses are pushing gift certificates as Christmas presents and BOGO packages are too numerous to count. This morning, I found myself in the middle of not only a sales transaction but one with an unexpected twist. I had finished my daily early morning workout and headed over to the 24-hour grocery store nearby. I love doing my shopping in the early hours before most people are up and about. It's efficient and I rarely even encounter other customers. I'm quite the extrovert most of the time, but at 6:30 AM, I'm sweaty from my spin class or weight training and I just want to use the self serve checkout and be on my way.

As I examined a package of steel-cut oats ( hoping it was microwaveable, not stovetop), a disheveled young man pulled up to me in one of those grocery store scooters you usually see being commandeered by the morbidly obese or extremely elderly. As he engaged me with a request to help him find the Lucky Charms, I sensed before I saw the evidence that he was a tweaker, the emaciated frame, acned complexion, and missing and rotted teeth. He attempted to smile, while trying to chat me up, but seemed almost too weak to manage more than half his mouth getting into the act. The expression made him look more tragic than goofy. I also knew he wasn't interested in Lucky Charms.

The well-rehearsed story began to tumble from his lips, while he averted his gaze. It was as though he was bored to hear himself and perhaps assumed I was as well. We both knew where it was going. How he was down on his luck, out of work, needed a place to stay and some money. I listened but didn't show any signs of responding, so he began to add to the story, at first one child, age 6, then another 4 and finally a 3-year-old. I had a quick thought that he was sensing for the exact number I would respond to, 3. The same number of kids that I have. I waited somewhat impatiently for the pitch. Years ago, homeless people would ask for spare change. After the recession a decade ago, it seemed like overnight that the ask went to a dollar, then a few dollars. Inflation being what it is, it made sense. The less you ask for, the less you get.

I interrupted his rambling to tell him I would give him $5. His eyes lit up a bit and he got a little animated. He was closing the sale and perhaps the total was bigger than expected. He kept talking, but I was looking for the fiver I knew I had in my wallet. I pulled it out and stuck the crisp bill in his palm. He looked down while mumbling 'God bless you' and something else I couldn't make out. I wanted to get back to my shopping and get on with my day. For the record, I usually don't give money to panhandlers. I used to, but now I prefer to donate through more official channels. I gave this guy a few bucks because he did a few things well.

He also attempted a down-sell. After I handed him the $5 bill, he asked if I had any change as well. I turned him down and wished him well, making a U-turn with my cart. I am not the typical prospect and I know it. From the moment he first approached me, I knew exactly how much I was willing to spend on him and I had already hit that limit. I am the same way in Las Vegas. I decide in advance how much I am willing to lose and once I hit that limit, I stop playing. But, even though this dude's down-sell was unsuccessful with me, I bet it works on most people he approaches. I am guessing this is so because most of the online marketing courses I have taken teach the exact same concept.

Once a prospect becomes a customer by making a small purchase ( they go from reading your blog to buying your $5 ebook on Amazon) you should immediately offer them something else. An up-sell is a slightly more expensive product. If it's a discounted price, but only if they buy it NOW while they are in the midst of making the original purchase, most people will buy, The psychology is that once you get them to open their wallet, it's much easier to get them to spend a little more right then, than hoping for a bigger, future sale. Waiters do it all the time, selling us appetizers, cocktails, and desserts we didn't even know we wanted.

So, what's the moral of the story, kids? There's nothing wrong with selling. In fact, it's a necessary and valuable part of dating, job seeking, parenting, running any kind of business and yes, even supporting yourself while homeless. As long as you need to do it, you might as well do it successfully and have a good attitude about it, which will totally make you better at it. Choose your target market, develop rapport ( the know, like & trust effect), tell a compelling story ( the homeless guy needs to work on his a little) and make your ask. And if you're on a roll and the prospect has become a customer, why not try a down-sell or an up-sell for that matter? If It works, you will be rewarded for your success and if it doesn't, tweak the offer and try again.

You've got nothing to lose but the 50% commission you'd pay to get someone else to sell your shit for you.